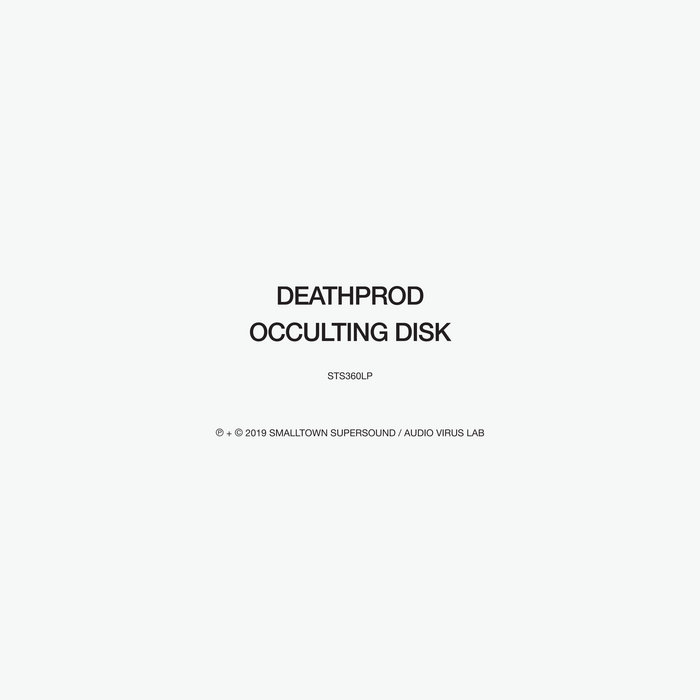 jwh A tone poem, or the sound of Gotterdamerung, fantastic either way. Favorite track: DISAPPEARANCE / REAPPEARANCE.

Michael Mueller This album is a megalith in musical form; a digitised, audible talisman that shattered silence like an extinct carnivore might've shattered bone.

And all around is echoes and dust.

Long notes of enormous size. Silent voids like giant caves. Swoops of sound. Static tidal waves. This is an album that speaks to its times by summoning its dark spirits, and reflecting them back at their proponents with this mighty, vibranium shield.

Epically proportioned, this is Mahler for the 23rd Century. Favorite track: DISAPPEARANCE / REAPPEARANCE.

mark t Its Deathprod!...
that should make anyone happy.

"Formidable dark ambient se’er Deathprod returns like a rare comet with the keeling “anti-fascist ritual” of ‘Occulting Disk’ - his first solo album in over 15 years - offering a life-affirming warning to the power of negative energy."
- Boomkat Album of the Week

"Occulting Disk is massive and tense—patiently, glacially aggressive."
- Bandcamp Album of the Day

Occulting Disk is an anti-fascist ritual. Recorded in Oslo, Reykjavik, Cologne, Berlin and Los Angeles between 2012 and 2019. It is the first Deathprod album to be released since the 2004 album Morals and Dogma. Liner notes by Will Oldham (note: excerpt below). LP cut by Rashad Becker at D&M, Berlin. Artwork by Kim Hiorthøy and Helge Sten.

“I remember driving over a mountain with my mother, she was in the passenger seat and we were being mauled and cuddled and battered and fried by sound; together. We were together experiencing something previously unimaginable, and we were facing the same direction, and we were moving through space and time knowing that a geographic destination some way ahead would bring an end. And the sound surrounded us, and for once our mutual silence was loaded with good. Because we were in the presence of each other, and we knew so much about how we had failed each other (it wasn’t a mystery any more), and we knew how we had maimed others when we worried too much about ourselves, how we had contributed to the faults of others simply by focusing in instead of out. Our mutual silences were laden with what that could only be called love. I used to hear love in music until I learned to hear love in sound. “ (Will Oldham)

Bandcamp Daily  your guide to the world of Bandcamp

Serena Cherry debuts her black metal project, plus a Pick from the Crypt block from Svalbard